" Come in!" called the superior of the Dominican convent, answering a discreet knock.

The large medieval door opened solemnly with a quiet moan to reveal sister porter wearing an expression at once worried and amused.

" She is back again, Reverend Mother." 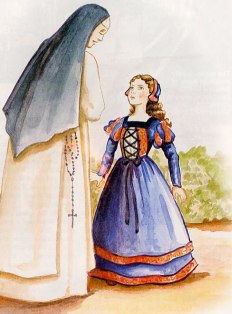 " Yes. She begs once more to be admitted to the convent. I must confess it is becoming hard to resist those large, innocent, and soulful eyes that implore so earnestly."

" Sister, she is but nine years old. Has this city of Bologna, or for that matter, the whole of Italy,

ever seen such a case? A nine-year-old nun? If we were to receive her...but how can we? In any

case, she would be homesick in three days...Well, let me see her."

Reverend Mother stood and walked down the long arched corridor with sister porter to the reception room. As she entered, a little girl stood up respectfully. She was a beautiful little girl, and beautifully dressed.

Imelda Lambertini belonged to a very noble family of Bologna, Italy. Her father was Count Egano Lambertini. Both her parents were most pious and loved their daughter more than anything in this world. Yet, they had always noticed that Imelda, though she fully returned their love with all her most affectionate heart, did not seem made for this earth.

Often her mother missed her company only to find her, after lengthy searching, in some far-off corner of their stately property on her knees and deep in prayer. Her mother had to call her name several times until she answered as if waking from a deep sleep.

Whenever people spoke of God, her eyes brightened and her attention did not waver. And, her parents had often noticed, when Jesus in the Blessed Sacrament was mentioned, her face became almost transfigured.

" Oh, Mamma," she would beg, " when can I make my First Communion? When can I receive Jesus in my heart?"

" You must wait until you are twelve, Imelda," answered Mrs. Lambertini, " for the Church does not allow children to receive before then."

And so it was at that time. To Imelda, it seemed so long to wait! Since all the earthly powers denied her First Communion, the little girl resorted to beseeching her beloved Jesus to come to her sooner. Deep in her soul she trusted that He would do something.

At the same time, she envied the Dominican Sisters of the Monastery of Santa Maria Maddalena where her parents frequently visited. " To be able to live in the same house as Jesus!" she thought. " What happiness!"

One day she thought of a solution to her problem. " Why, I'll knock at the convent and ask to be received as a novice. If I cannot receive Him yet, at least I can live in the same house with Him and serve Him day and night."

To the young Lord, it seemed a plan. She simply Dominican convent child in love with her simple, straightforward walked over to the and knocked. " Sister, can you ask Reverend Mother if I can come live here and be a nun?"

" But, Imelda, we are all professed religious here. One day you will probably join us, and we will be delighted to have you, but you must wait a few years. You have such good parents and such a beautiful home, my child. Are you hot happy there?"

" But, our life is very hard. We work hard and pray a great deal, even getting up in

the middle of the night to pray the Office."

" Oh, Sister, I would not mind that at all. I would be obedient and happily do everything I'am told. Please, Sister!"

Of course, we know Mother Superior's reaction. Ever so good to Imelda, as always, she nevertheless would have to send her back home. But Imelda insisted.

This day, however, as the Reverend Mother Superior saw the child standing in the parlor and gazing at her imploringly, something stirred in her good soul. " So much insistence in one so young," she thought. " I sense God's finger here. Perhaps I should let her try."

To Imelda's great joy, Mother Superior did not turn her away this time but spoke with her at length. Then she said that if her parents allowed, she could be received in the convent for a trial period.

Her good parents were saddened but not surprised. Deep down they had expected that something extraordinary would happen to their child. Here it was. God was asking them for her very early, and they gave her to Him as Saints Joachim and Anna once gave their three-year-old daughter, the young Blessed Mary, to the Temple.

In the convent little lmelda was like a fish in water. She loved the silence, the long stone corridors with their beautiful arches, the white and black habits of the nuns, the canticles, the prayer, the work. Above all else, she loved the tabernacle! Finally, she was under the same roof as her Jesus.

Whenever the monastic schedule permitted, there she was, kneeling in the high choir overlooking the convent chapel, her large eyes fixed on the tabernacle

In community life she was like a ray of sunlight amidst so many adult sisters. They delighted in her company yet were severely warned by Mother Superior not to spoil her.

Still, because of her young age, Reverend Mother did not want Imelda to participate in all the acts of the community, especially rising in the middle of the night for the Office.

lmelda, however, begged to be allowed to do everything. There was no denying her. So it was that in the middle of the night the angels inhabiting those sacred halls must have gazed in awe at 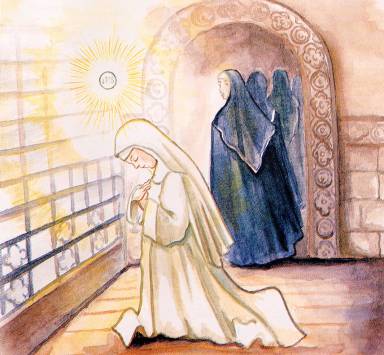 a long line of white robed nuns and then a tiny white figure, all walking in silence to Matins.

Only one aspect of her life in the convent saddened her. She was still not able to receive Our Lord in Holy Communion. As she watched the sisters receive, her soul burned with the wish to be among them. At times, she could not contain her tears. Then it was that she most earnestly besought heaven to have mercy on her and let her receive, somehow...

One day as the nuns Bled out of the choir after Mass, the last in line turned to look at the small white figure still kneelig in prayer.

Imelda usually remained longer, motionless and absorbed in prayer. The community, quite accustomed to this, let her be. It was almost automatically that the last sister looked back just to get a glimpse and marvel at this small wonder of Eucharistic piety.

This time, however, the respectful sister suddenly stiffened, rooted to the floor. There was the small girl, kneeling with head bent as always, but hovering close above her was a white Host shining in a soft light!

The whole community hurried back into the choir and fell on their knees at the incredible sight.

Mother Superior understood. There was no doubt that the Creator and Lord of all wanted this eleven-year old to receive Him.

She summoned the chaplain, who approached in awe with a golden paten. As soon as he had reached the kneeling girl, the Host settled on the paten!

At this, lmelda, who all the while had her head bowed and her eyes closed as if oblivious to everything, slowly raised her radiant face and opened her mouth. Taking the host, Father Chaplain gave her First Holy Communion. She lowered her head once again and remained motionless. 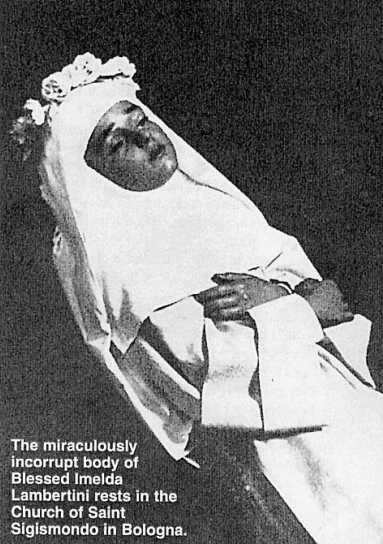 After a long while, Mother Superior approached her. " lmelda, my child, it is time to go now."

Imelda did not respond.

Again the Mother Superior spoke, but again there was no answer. Taking Imelda gently by the shoulders, the good nun tried to coax her to rise, but Imelda collapsed in her arms. Her face was nxed in an expression of unspeakable bliss.

Imelda had once said, " I don't know how anyone can receive Our Lord and not die." Now she had received Him and this flrst meeting with her Eucharistic Jesus was too much for her small burning heart to bear. She had gone with Him.

Little Imelda Lambertini was beatified in 1826 and was declared patroness of First Communicants in 1910 by Pope Saint Pius X, who that same year decreed that children could receive their First Holy Communion at a much earlier age.

lmelda's small body lies incorrupt in a beautiful reliquary in the Church of Saint Sigismondo in Bologna. An expression of ecstatic bliss lights her beautiful face and seems to say, " My Jesus, He is my reward immensely great."